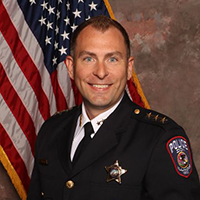 Chief Barden grew up in Zion, was a graduate of Central Jr. High, and graduated from Zion-Benton Township High School.
Chief Barden has attended a number of specialized schools most notably the DEA investigator course
and Northwestern University’s Center for Public Safety – School of Police Staff and Command.

Chief Barden looks forward to the challenges as Chief of Police with some new and continuing initiatives to include,
leading a charge in combating crime through the use of technology as well as establishing meaningful relationships within the community
to promote stronger and clearer communication working towards a common goal.